How important is away form in Super League?

Rugby League is now in its second season of its new format where the Super League splits into two after the 23 regular rounds (the top 8 forming the Super 8s and the bottom four joining forces with the top four from the Championship to make up the Middle 8s). The new Super League season is now a month old and there have already been 11 away wins out of 26 games with a draw thrown in for good measure. After this start to the season, it is interesting to explore the part that away form plays in achieving a place in the Super 8s. 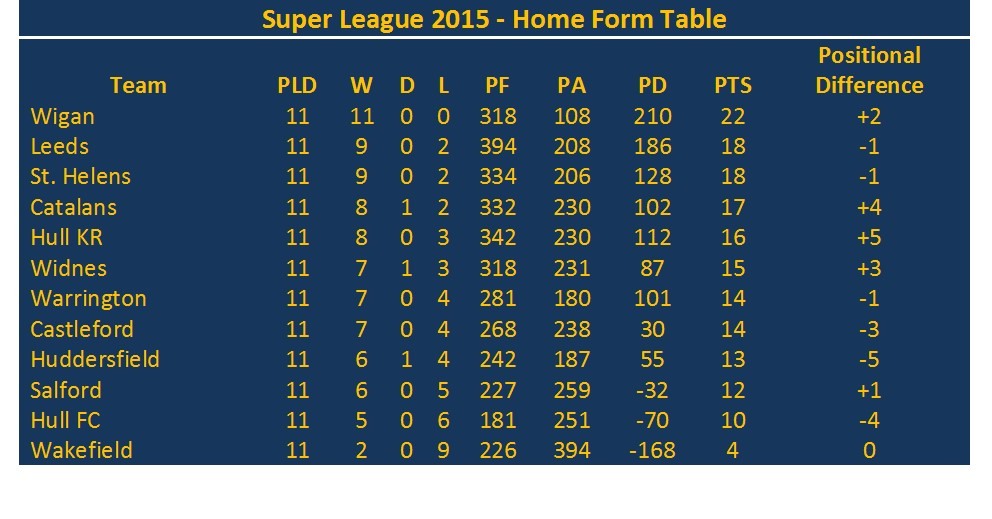 In the 2015 season, the table at the end of the season if just home games counted would have looked like the above (Magic Weekend results have been disregarded as these were played at a neutral venue).

There are four notable teams with a big swing in position from the actual final league table: Catalans, Hull KR, Huddersfield and Hull FC. Whilst Catalans ended the regular season in the top 8, ensuring their participation in the Super 8s, their position would have improved to 4th

had just home form counted with them only losing two games at the Stade Gilbert Brutus. ###>

Hull KR missed out on the Super 8s and were instead consigned to the Middle 8s. This data highlights why that is with them winning eight of their 11 home fixtures but their form away from the KC Lightstream Stadium ultimately letting them down.

Huddersfield and Hull FC ended the regular season inside the top 8 but this was mainly down to their away form. Neither were good at home and would have in fact missed out on the Super 8s had just their home form counted with the Giants finishing five places lower (5th 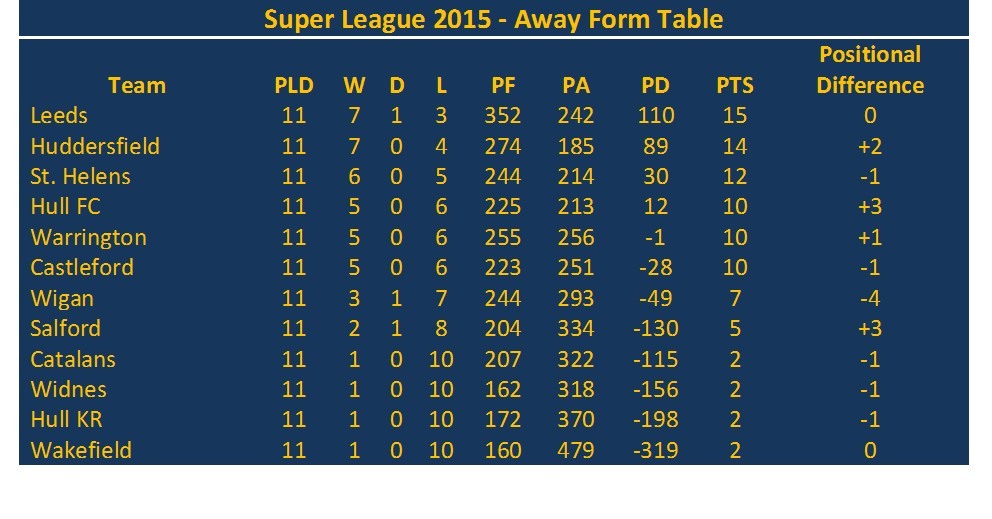 They both had to rely on their away form with Huddersfield winning the second highest amount of points away from home with seven wins culminating in 14 points. Hull FC would have ended the season in fourth if they could have solely counted on their away form, gaining 10 points from their 11 away fixtures.

On the flip side to this, despite the impressive home form of Catalans and Hull KR, the latter missed out on the Super 8s and Catalans scraped in by a solitary point. This highlights the importance of winning games on the road and shows that even with solid home records, the Super 8s may be out of reach unless points are also collected away from home.

Contrasting fortunes of Hull KR in 2015

The huge contrast in fortunes of home and away form is probably the most evident with Hull KR who missed out on the Super 8s last season by just two competition points. When looking at their figures in greater detail, their points’ totals and points per game (PPG) average are of most interest. 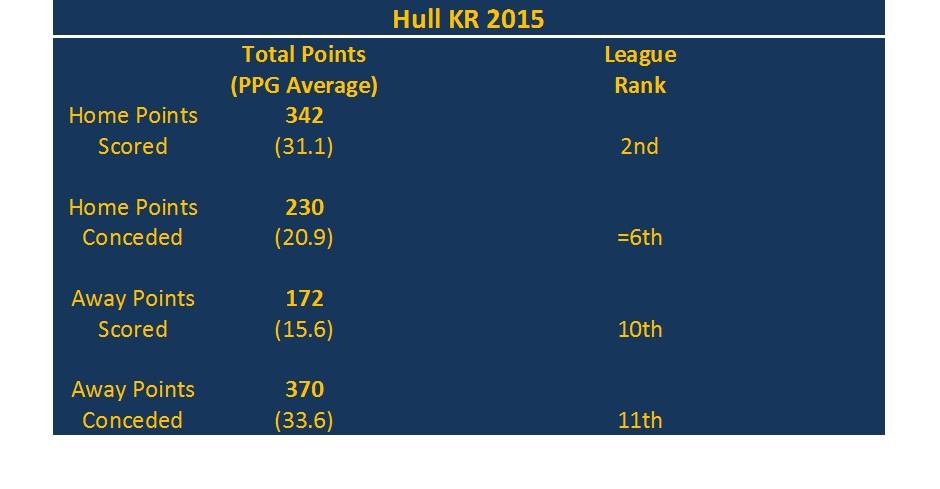 The Robins ended up 5th

in the regular season home form table but 11th away from home. Their problems weren’t restricted to just one side of the ball either, which was their downfall in their quest to make the Super 8s. They were very good at home, scoring the second highest amount of points with 342 as well conceding 230 points, good enough for joint 6th. ###>###>###>

However, away from home, their free-scoring nature wasn’t as evident as they ended 10th

out of 12 for points scored having managed to put just 12 points more on the board than the lowest ranked Wakefield. When defending, they ended even lower with only Wakefield propping them up as they conceded 370 points, an average of almost 34 points a game. This was an unsustainable amount, especially with them only averaging just under 16 points per game with ball-in-hand. ###>

Having scored 66.54% of their 514 points at home as opposed to just 33.46% away from home, it highlights their lack of consistency. Hull KR conceded 600 points in total and 61.67% of these came away from home with 38.33% at home, again showing a vast difference. This demonstrates their need to perform better away from home which will be crucial in the current season if they wish to make the Super 8s and not be consigned to the Middle 8s once again.

Whilst the sample size is currently too small to read much into the start of the new season, it is interesting to note that of the 52 competition points that have been on offer so far, 23 of those were won away from home (44.23%). Last season, the total number of away points won came in at 91 (34.47%). If the current level of away wins can be maintained or even increased, it will be intriguing to see how this affects the race for the Super 8s at the end of the regular season.