How Does an Athlete’s Approach to the Indoor Season Impact Their Ability to Perform when it Matters Most?

Indoor athletics has always been the poor relation of its outdoor cousin. Many of the top names compete infrequently indoors or forgo it altogether. It is often mooted that this is because their focus is on the global events of the summer, such as Rio 2016 with all the glory that success there brings.

This is true of the stars of athletics from all over the world, with only three of 2015s top ten male 100m performers having raced over the 60m distance indoors that year. This is further demonstrated by the 60m record, which has stood since Maurice Greene ran 6.39 in 1998; the 100m outdoor record has fallen eleven times since then. Britain’s Christine Ohuruogu, famed for being at her best at the right time, has barely competed indoors since 2006, and world championship and Olympic success followed in 2007 and 2008. This suggests that chances of success are improved by a sole focus to compete outdoors.

Well is this true? I wanted to take a look at whether starting your season early or competing frequently in January and February prohibits athletes from being at their best when it matters most.

I decided to take a look at Britain’s top performing men over 100m, those who have run quicker than 10.20 since 2012 and could realistically expect to reach the UK athletics criteria for qualification for Rio of 10.16. I then assessed how they approached their indoor workload and how this impacted on their outdoor performance.

Table 1 shows the season(s) when each of the athletes vying for a 100m birth at Rio 2016 achieved their fastest time over the past 4 year cycle. 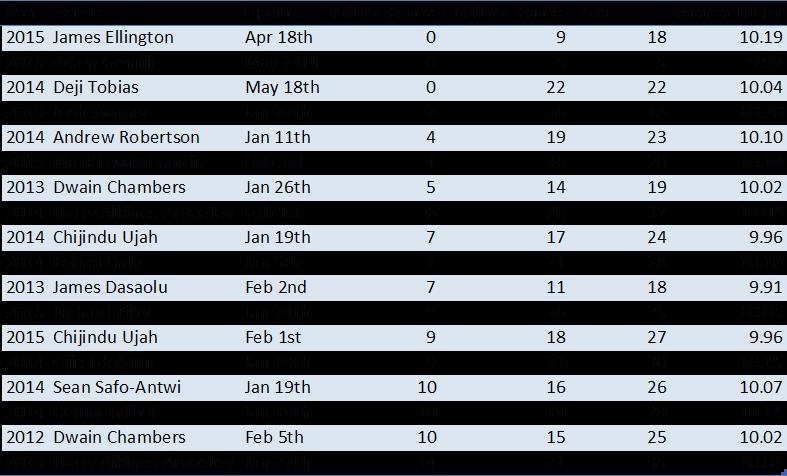 Starting a season early also doesn’t appear to stop an athlete from reaching their best, with 10 of those 18 (55.6%) seasons beginning in January compared with 29 of the 60 (48.3 %) total seasons. This includes Keiran Daly’s 2014 season that began Jan 5th

, which was the second earliest season opening of the 60 looked at.###>

Graph 1 compares the cumulative percentage of indoor races in every season analysed and the percentages of seasons where 100m bests were achieved. It shows that you are less likely to peak outdoors if you have less than 7 races indoors, more likely to if you have 7-10 races inclusively and no difference if you compete in more than 10 races. 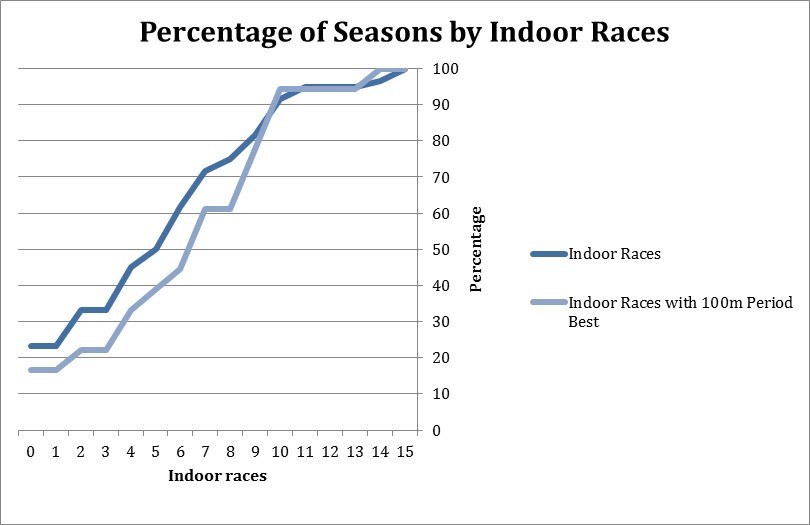 Another aspect to consider is whether competing indoors extensively results in athletes lightening their workload outdoors to maintain form throughout the season. Table 2 shows that the seasons when athletes achieve their best times are not only when they are competing more indoors but also they compete more outdoors. This suggests a more intensive indoor program doesn’t require a reduced outdoor program.

Okay, so this seems to debunk the myth that starting your season early and racing frequently when doing so makes you less likely to achieve your best in the outdoor season. However it doesn’t answer the question of whether it prevents you from doing so when it really counts. So I want to look at when these athletes are performing their best. Is it in front of 200 people on a glorious day in Bedford or is it when it really matters? So how does an indoor season impact upon championship performances and how does it affect consistency?

Firstly, lets look at an athlete’s performance in championships. For the purpose of this report, championships under consideration are the British champs (excluding the relatively weak heats), the four senior international championships and junior championships at world level. Graph 2 shows the average of championship performances below the best that the athlete achieved for the period analysed, sorted by the number of indoor runs. 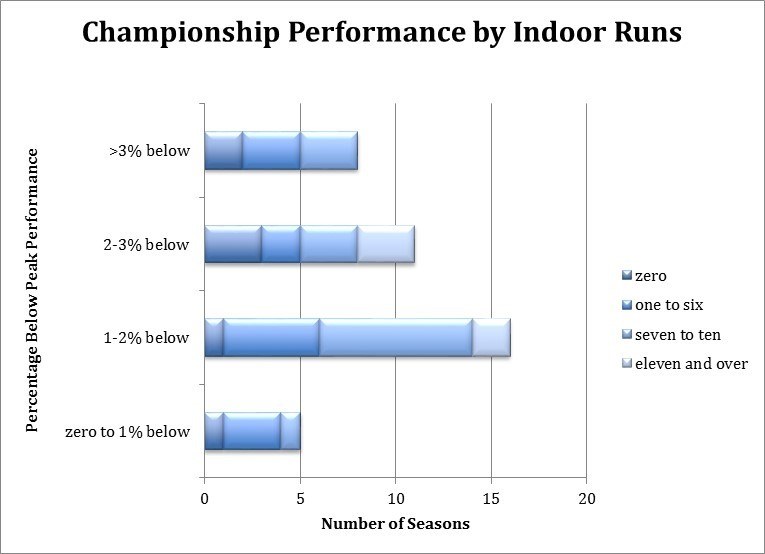 This graph shows that zero indoor races are more likely to occur in seasons where championship performance is >2% below the athlete’s best. Additionally, it appears that light indoor workload is best suited to improved championship performance, as 8 of the 13 (61.5%) seasons where the competitor races indoors less than 6 times he performed within 2% of his best on average. A larger workload of 7 or more races seems to result in middling performances of between 1-3% of their best 80% of the time.

Now to look at consistency, to measure this I have used median absolute deviation for any given season. This should be a more robust measure than standard deviation, as it will be less impacted by a pedestrian qualifying time in Tampere. Graph 3 shows the consistency of all outdoor seasons with more than ten 100m runs. 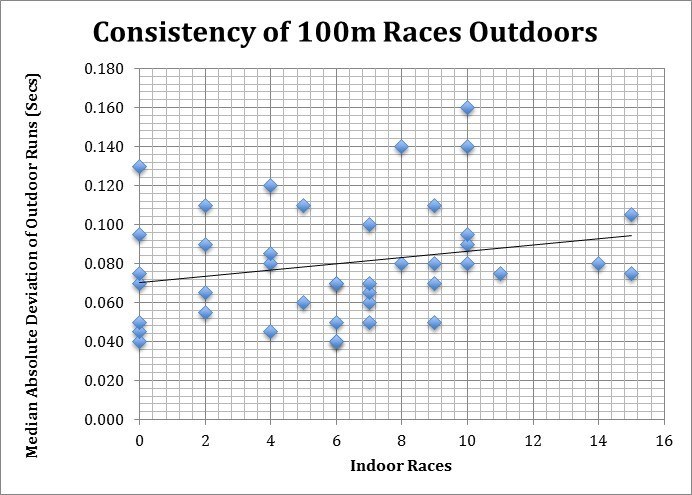 This shows that the extent of an indoor season has little impact on outdoor consistency and consequently little likelihood that it would impede upon an athletes ability to perform when the spotlight is on. The line of best fit shows a potential for a light indoor season to benefit consistency but this would require further investigation.

To do this I have take the same approach but this time just for athletes whose age would prohibit great improvement in their performance or equally significant deterioration over the period. This is the athletes born prior to 1991 and after 1982. Graph 4 shows their consistency. 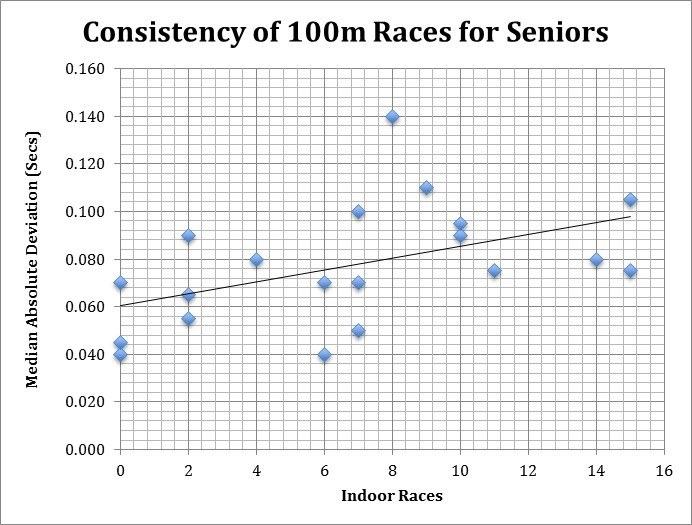 Graph 4 indicates a slightly stronger negative correlation between indoor races run and outdoor consistency, with the 9 most consistent seasons of the 20 analysed having 7 indoor runs or less. This possible finding would require a larger data set to be proven.

In conclusion, the idea that an indoor season should be considered when planning for summer success is valid. It seems as though running indoors helps athletes to achieve their best times outdoors. However it can contribute to reduced championship performance if the racing is too extensive. Additionally it can potentially reduce outdoor consistency, impacting on the athlete producing the goods when it is most desired.