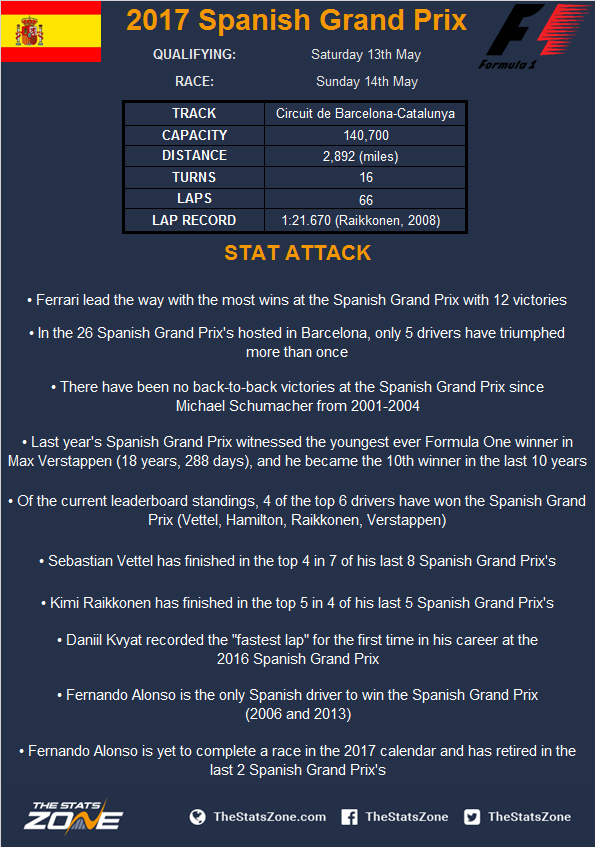 Formula One travels to Spain and the Circuit de Catalunya, Barcelona, as the 2017 championship battle shifts focus to the start of the development race.

Teams will be bringing major changes to Spain. The three leading contenders; Mercedes, Ferrari and Red Bull, are all taking a host of large-scale upgrade packages to the Spanish Grand Prix, in a relentless attempt to beat their rivals.

Mercedes are working hard on reducing weight, particularly with their heavy gearbox. They are also introducing a new rear-wing, 'winged' nose and a new barge board. Ferrari are concentrating on improving aerodynamics, and Red Bull have produced a new 'B-spec' car, but will have to wait a little longer for Renault’s first big power upgrade of the season. If Red Bull are to be genuine title contenders this season, then their heavily modified car must deliver a big step forward or they risk falling even further behind Ferrari and Mercedes in the title race.

Catalunya is a circuit the teams know well - they all go there for testing in winter. The track is characterised with a pair of long straights, a series of slow, tight corners, and the very long turn three. It is a test of car set-up, chassis, aero, brakes and engine, and is hard on the tyres. Overtaking can be difficult, and securing pole is important. Drivers that do well here, tend to go on and do well for the remainder of the season. So, this weekend's result will be a good indication going forward.

Going into this weekend, Mercedes hold a slender lead of just one point over Ferrari in the Constructors' Championship, after Bottas took his maiden F1 win and well deserved victory in Sochi. Vettel has the momentum in the Drivers’ Championship, clear by thirteen points over Hamilton, who could only manage a distant fourth place finish in Russia.

The big question heading into the Spanish Grand Prix, is whether Hamilton can bounce back. He was slow all weekend in Russia, including all the practice sessions, and finished 36 seconds behind his team-mate and eventual winner, Bottas. Speaking of the Finn, can he repeat his feat and win again in Spain? Certainly another win or two this season will strengthen his future with the Silver Arrows team.

Have Ferrari fixed their starting problems? Despite a qualifying one-two at Sochi - a first Ferrari front-row since 2008 - both Vettel and Raikkonen were slow off the line, while Bottas out-dragged them into turn two and went on to win the race.

Can Verstappen win again in Spain and replicate his stunning first win last year? Force India finished sixth and seventh in Sochi, and seem to have the edge over their closest rivals Williams, and will look to maintain their strong showing here. Finally, will local Spanish hero, Alonso, finally finish a race in 2017, and will his McLaren even get to start the race this weekend and make it past the formation lap? For Alonso, Indy cannot come soon enough.

Look out for the new car liveries this weekend as the new F1 owners try and make it more obvious who the drivers are in the cars!

It is becoming increasingly more difficult to predict who will come out on top at each race, with Ferrari finally mounting a challenge to Mercedes. As with all races so far in 2017, the scene looks set for another tight battle between Mercedes and Ferrari, but the start of the development race could bring a boost in performance for their rivals, as updates galore are due to be introduced in Spain – which is the big unknown.

Tyre management with the harder rubber and strategy will be key in Barcelona, and for that reason, the prediction is for Vettel to take the win this weekend and extend his lead in the Drivers’ Championship.