When the final whistle was blown at Old Trafford on 17th May 2016, a mixture of celebration, despair and disbelief spread across the nation’s football fans. Previous champions had been toppled; their crowns lying in the dust, while the unexpected underdogs had come to the forefront to emerge with the title. It had been a season for the ages, and fans up and down the country were already looking ahead to Saturday 13th August 2016 in anticipation for the start of the new season. No, not the start of the Premier League season but far more importantly, the return of Fantasy Premier League and the bragging rights that comes with it (sure, we all had Euro Fantasy in between but who really understands what’s going on in that game, anyway?). For the victors, it has been a summer bathed in glory, of times spent reminding anyone and everyone who would listen of their fantasy exploits from the previous season; for the losers, their summer has been one of quiet discontent, and the wait for the chance of redemption.

As anyone who has ever played fantasy football before knows, there is no greater task than selecting your squad of fifteen for the opening day of the season. The ability to avoid playing that early wildcard can pay dividends later in the season, when European fixtures begin and injuries start to mount. Hours are spent neglecting work, partners and spouses while we weigh up how to fit Aguero, Kane, Hazard and Sanchez into the same team before succumbing to the reality that it cannot be done. No squad is more important than the one selected for the opening six fixtures, as while championships are not won in the opening weeks, they can certainly be lost. Here at TSZ, no one enjoys fantasy football more than us, so in order to help with that initial squad selection we have provided a statistical analysis for the opening six fixtures.

Before proceeding, there are two important factors to note:

1. As Burnley, Middlesbrough and Hull have been promoted this season, we have not analyzed their players. For teams that play any of these three promoted squads in their opening six fixtures, we have looked at how they performed against the equivalent team from last season.

2. The totals DO NOT include bonus points and save points.

Optimum squad if price and player rules are ignored 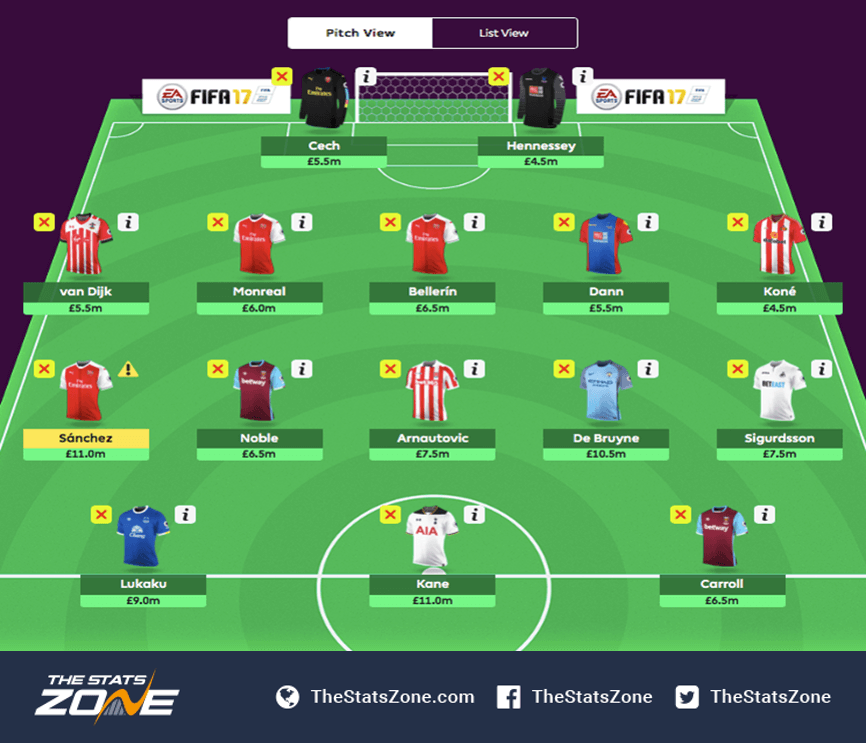 Arsenals No.1 is our No.1. Last season, Cech kept three clean sheets and conceded only four goals on his way to 23 points in the corresponding six fixtures last season.

Our back up keeper is Crystal Palace’s Wayne Hennessey who, like Cech, kept three clean sheets but conceded five goals in the corresponding six fixtures last season.

Southampton’s resolute centre-half Virgil van Dijk comes in as the highest scoring defender. With three cleans sheets and two goals scored he represents a viable threat at both ends of the field.

Arsenal’s propensity for attacking fullbacks is demonstrated as both are represented in the top scoring defenders. First up is left-back Nacho Monreal, who kept three clean sheets in addition to providing two assists in the six corresponding fixtures last season.

The second of Arsenal’s fullbacks, Hector Bellerin is £0.5m more expensive than his left-back counterpart. Like Monreal he also racked up three clean sheets but gained just the one assist in comparison, thus making Monreal appear the more attractive option.

Perhaps surprisingly, Crystal Palace centre-half Scott Dann finds his way into the top five defenders. Registering three clean sheets and a goal, he demonstrates that it is not just the big teams that can record the shutouts. However, at £5.5m he represents a large investment for a team that is not known for its defence.

The final slot in the back five goes to Sunderland centre-half Lamine Kone who, despite only playing in three of the six fixtures, amazingly scored twenty-four points. If Kone can lock down a starting berth under David Moyes (whose teams are usually defensively sound), he may represent a very reasonably priced defender with an eye for goal.

Representing Arsenals fourth player in this squad, their main man Alexis Sanchez represents the highest scoring midfielder over the six corresponding fixtures last season. Registering a goal, an assist or a clean sheet in five of the six matches, Sanchez demonstrates he is a consistent scorer with the propensity to gain massive point totals, and is well worth his £11.0m price tag.

West Ham captain Mark Noble is next and matches Alexis Sanchez’s thirty-seven points over last season’s corresponding six fixtures. At just £6.5m, Noble demonstrates the benefits of having a club’s penalty taker in your side, as three of his five goals over this period came from the spot. However, it should be noted that solely relying on penalties for points might not yield the most consistent results.

With three goals and two assists, the mercurial talent of Marko Arnautovic is next in our lineup. Capable of both brilliance and anonymity in games, the Austrian ace is reasonably priced at £7.5m and, if he can sustain his form, a real bargain.

After an excellent debut season in the blue of Manchester City, Kevin de Bruyne will set players back £10.5m this season. With two goals and three assists in the corresponding fixtures last season, and Pep now at the helm, City (and De Bruyne) look like a good bet to continue their goal scoring form.

A man reborn since his return to Swansea, Gylfi Sigurdsson rounds out our top five midfielders. With a goal in four of the six fixtures, his points tally of thirty-two is made all the more impressive given he didn’t even get a run out in one of the fixtures last season. Priced reasonably at £7.5m, Sigurdsson would seem an ideal pick for those looking in the mid-range bracket of midfielders available.

The honor of top scoring centre forward and top scoring player overall goes to Everton’s Romelu Lukaku. With a brace in two games and either a goal or assist in three of the other four, Lukaku has proven he puts up points consistently. Priced at £9.0m and with a potential big money move to Chelsea on the horizon, Lukaku (and those who select him) will be looking to emulate last season’s total.

Tottenham and England striker Harry Kane is the next forward to make the grade. Proving that his breakout season of 2014/15 was no fluke, Kane bagged three goals and two assists in the six corresponding fixtures last season. However, worryingly for fans looking to spend the £11.0m required to acquire his services, he failed to register a goal or assist in three of the six fixtures last season.

Despite missing two games and coming on as sub in two of the four appearance he did make, Andy Carroll showed what a menace he can be when fit (and when you have Dimitri Payet putting the ball in). With three goals scored and one assist in the four games he played a part in, if Carroll can stay fit and lock down a spot in Slaven Bilic’s starting eleven, he may represent an excellent budget forward for the coming season.

Optimum squad if price and player rules are obeyed 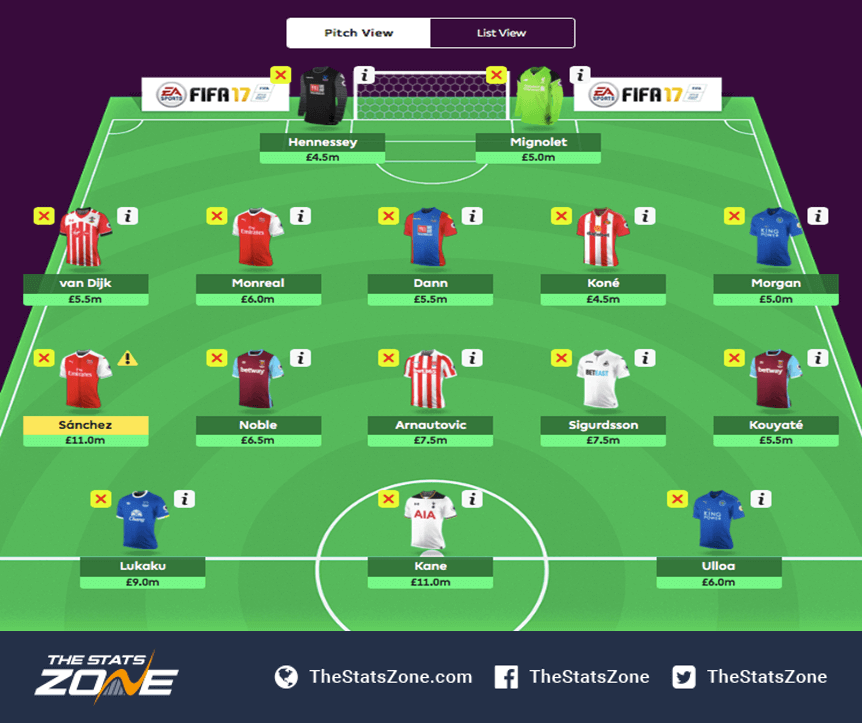