With the start of the test series between England and Sri-Lanka to get underway in the next couple of days, we’re going to look at how both camps are faring heading into the first test at Headingley starting on the 19th of May (11am local time).

- This will be the 9th test series that these two teams have played on English soil with both teams registering three series wins. However there have been three series consisting of only one test match with Sri-Lanka prevailing twice.

- Angelo Mathews coin toss winning ability will be crucial for the tourists. Since the year 2000, England has batted first on their home soil a total of 59 times. During this time they have won 36 of those matches, drawn 12 and lost just 11.

- The form of Sri-Lanka has been indifferent as of late, with comprehensive losses to New Zealand and India surrounding a 2-0 series win against the lowly ranked West Indies.

- England’s form has also been quite inconsistent, the Ashes series win against Australia consisted of a 400 run defeat and a match where they lost by an innings. Following the Ashes, England were comprehensively beaten in a series against Pakistan 0-2-1 (win-loss- draw) but won the most recent away test series against the Proteas (2-1-1). 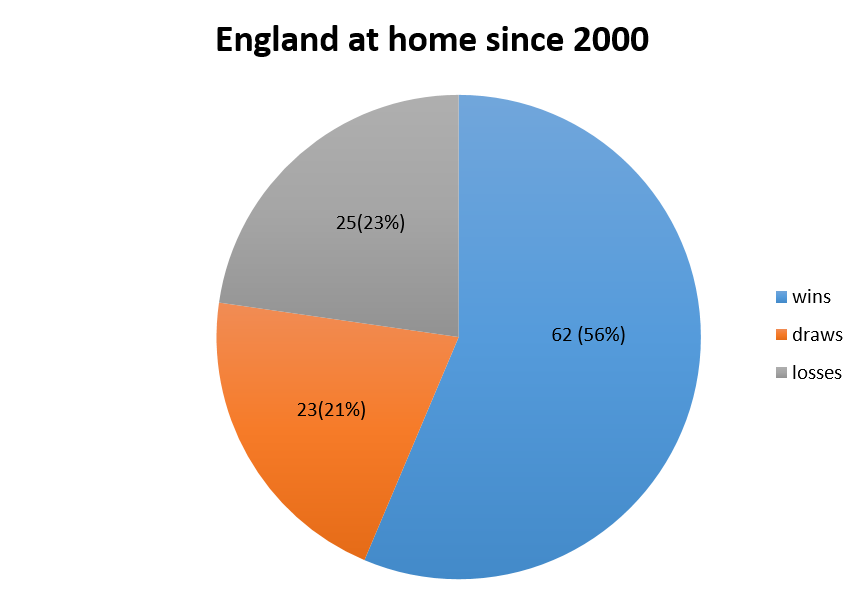 Below are the current test squads and each player’s primary role for their country.

Being the touring side, Sri-Lanka has named an extended squad to select from. Interesting, is the number of bowlers and “all-rounders” Sri-Lanka have selected for this tour with only three specialist batsmen chosen in addition to a pleather of wicket-keeper batsmen. England, on the other hand has chosen just a twelve-man squad with a good balance of batsmen, bowlers and all-rounders.

When comparing both squads overall batting averages, England hold a distinct advantage over the tourists leading the squad average 31-23. 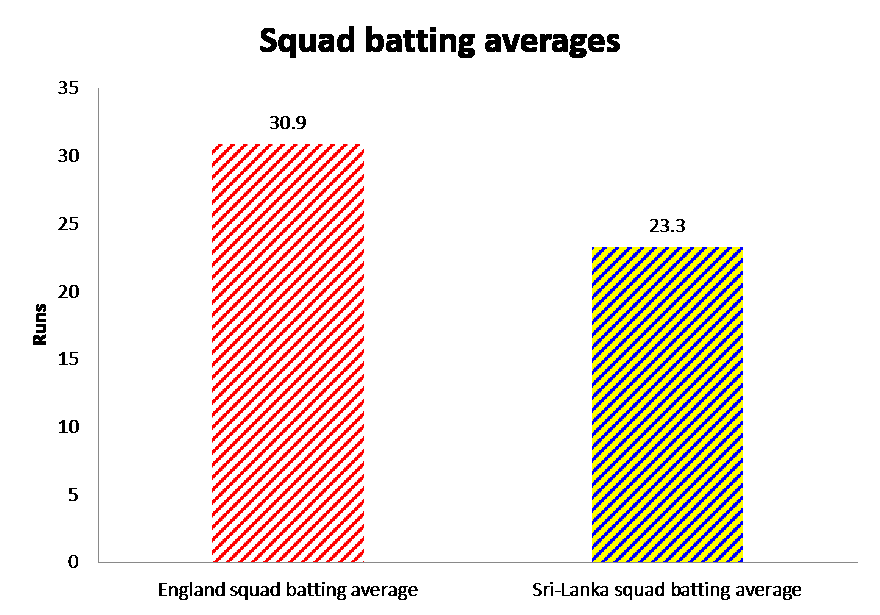 With the number of bowlers chosen in the Sri-Lanka squad, we’ve also compared the squads not including specialist bowlers. 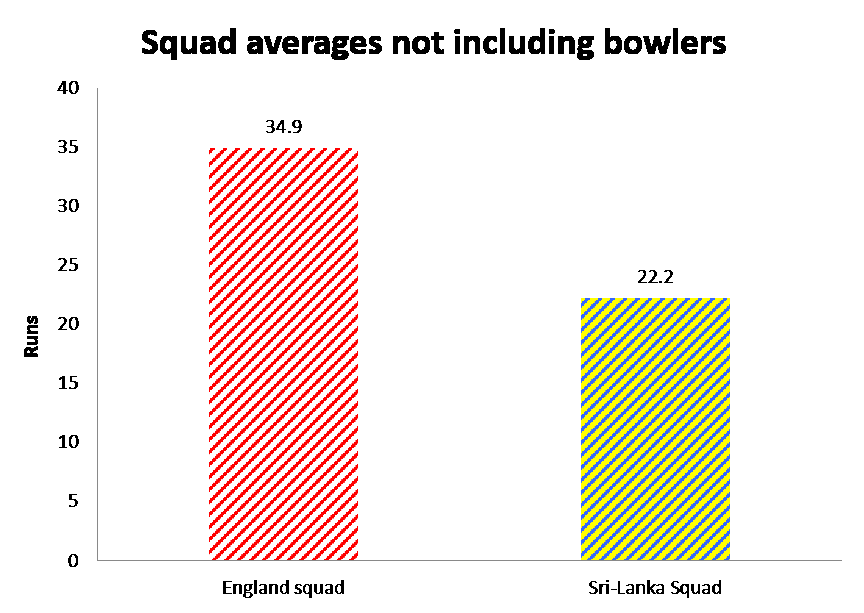 These numbers show that Sri-Lanka is lacking batting depth in their squad. Although Angelo Mathews and both boast averages over 40, the numbers are worrying for many of the Sri-Lankan all-rounders. England’s batting numbers aren’t exactly elite, the depth of their line-up is more apparent with lower order players Moeen Ali (27.9) and Stuart Broad (22.9) significantly bolstering the batting order.

Due to England’s twelve-man squad, there should be no real surprises for the first test with Nottinghamshire’s Jake Ball set to run the drinks. 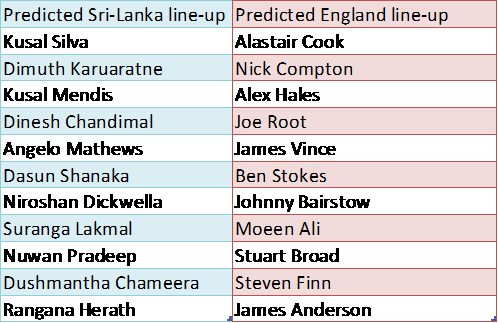 However there’s a lot of intrigue surrounding the Sri-Lankan line-up, with the loss of experienced campaigners/legends Kumar Sangakkara Mahela Jayawardene and very few players impressing during their past two tour matches against Essex and Leicestershire. Dhammika Prasad has been ruled out with injury and with the visitors only taking five wickets in their most recent match the bowling line-up is unclear. With the bat two players have seemed to cement themselves in the staring XI. Dasun Shanaka saved the tourists with a century in the first innings, whilst opener Dimuth Karuaratne made a second innings century before retiring. The middle order will prove to be an interesting line-up with only one other middle-order player passing a half-century for the entire match.

England’s squad just has too much fire power both with star batsmen in Cook and Root in addition to a lethal bowling attack including the worlds number 1 ranked test bowler in Stuart Broad.

Man of the series - Ben Stokes

Expecting Stokes to get plenty of opportunity with both bat and ball, the English middle order has a few unknowns with Compton, Hales and especially the debutant in James Vince. Stokes has shown is worth the bat, particularly with an impressive series against the Proteas in South Africa where he averaged a healthy 63 with the bat and also claimed 12 wickets.

The Sri-Lankan bowling line-up is very inexperienced. Aside from Rangana Herath with a whopping 297 test wickets, no other Sri-Lankan bowler selected for this tour has taken over 60. With this inexperience, we should see Cook carry his county cricket form into the highest level.

Following a two-year absence from test cricket, Finn has responded brilliantly in his past two series against both Australia (13 wickets at 29) and South Africa (11 wickets at 26). Finn seems to have harnessed his potential and combined with his towering height, he should be a tough ask for the inexperienced Sri-Lankan batting line-up.