Do teams that travel more in the NBA and NHL perform better?

A well established fact in sports is that the home team on average wins more than half of their games. Over the course of time, individuals have tried to figure out the underlying factor to this phenomenon. Media, players, coaches and experts in different sports have suggested that the effort of traveling between venues is one of the key factors for this home advantage. Anyone that follows NBA and NHL knows that their regular season has just wrapped up, each team having played a total of 82 games, or simply put, 41 away games. 41 games on the road add up to several thousand miles travelled per season. This article will take a deep dive into the travelling effect for NBA and NHL teams and see if there is evidence to support that longer travel has a considerable impact on team performance. As an extension to this it is also interesting to look into if there is any correlation between teams’ home and away performance i.e. do teams that perform well at home also tend to do be high performer on the road.

There are a number of considerations in this analysis. Firstly, we will be looking at travelling distances for the 2015/16 regular season. Secondly, the study looks at the win percentage for each team (home and away). The third stage contains a visualization of the data through four scatter plots (2 NHL / 2 NBA) to be able to observe the performance at home and away versus travelled miles. Each plot has a trend line with a 95% confidence interval attached to it. The reason behind plotting home win percentage against miles travelled is that it makes it possible to see whether the trend between home and away performance is significantly different. As an extension to this we will carry out a correlation test which measures whether there is a relationship between home and away win percentages. The correlation test gives a value between -1 and 1 where -1 means a perfect negative correlation, 0 no linear relationship and +1 a perfect positive relationship. 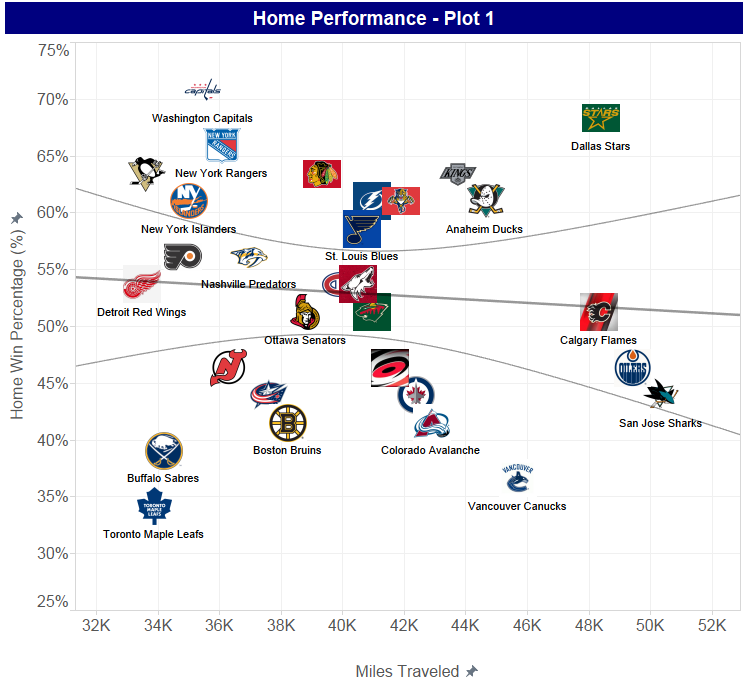 Looking at the first plot for home performance in the NHL there seems to be a slightly negative relationship between home team win percentage and miles travelled. This suggests that lengthy travelling also has a bad impact on home performance. 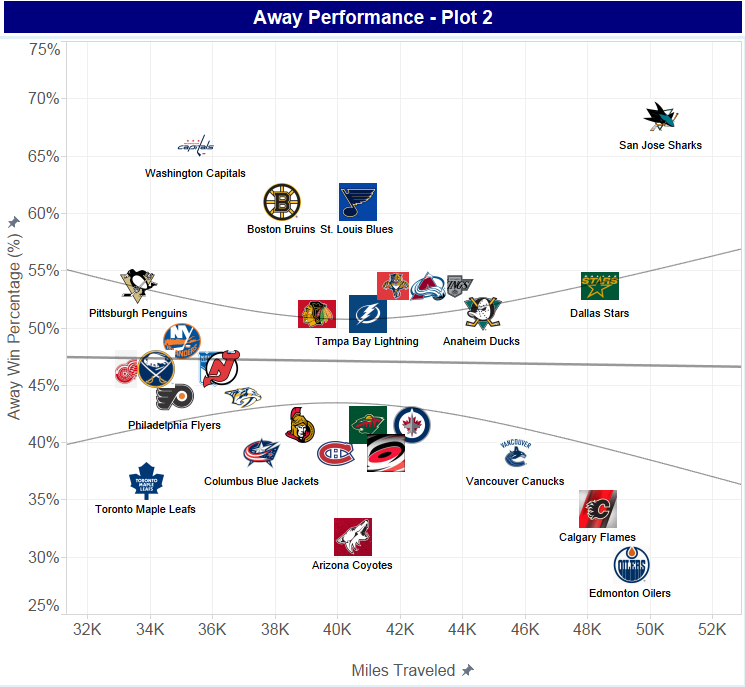 Moving on to plot 2 (NHL away performance) we can see a trend that is slightly declining, although not as steep as in the first plot. Remarkable out of these two plots is San Jose Sharks who show a home team winning percentage at 44% compared to their away record at 68%. Considering they are the team in NHL who travels the most (50K miles) this goes against the hypothesis of weaker away performance if a team travels further.

As a final point on these two plots it looks like teams roughly can be found in a similar spot in relation to other teams in both graphs. This strengthens the assumption that the proportion of games won on the road correlates with the home record. 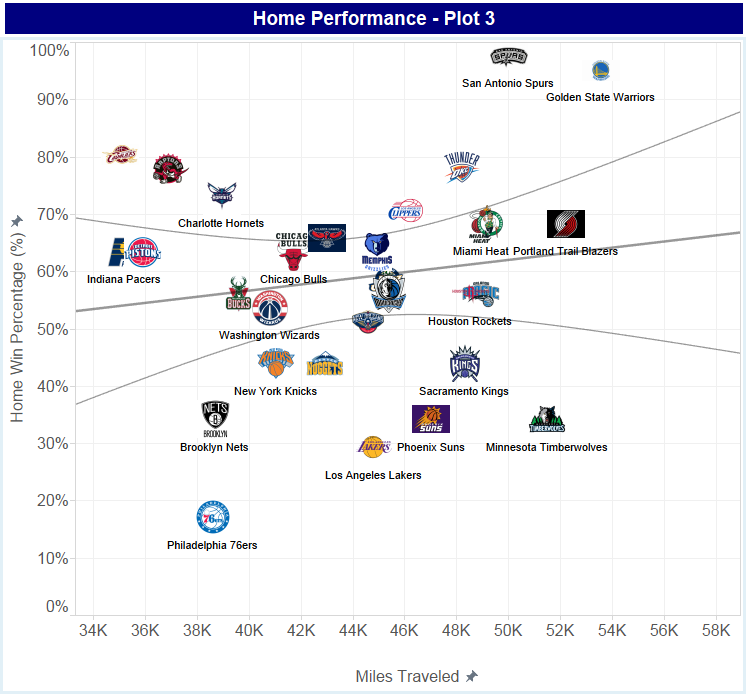 Moving on to plot 3 (NBA home performance) it suggests the opposite from the NHL graph (plot 1) in that teams travelling more also have a larger home win percentage. Remarkable in this graph is San Antonio Spurs and Golden State Warrior with an almost perfect home record at 98% and 95% respectively. 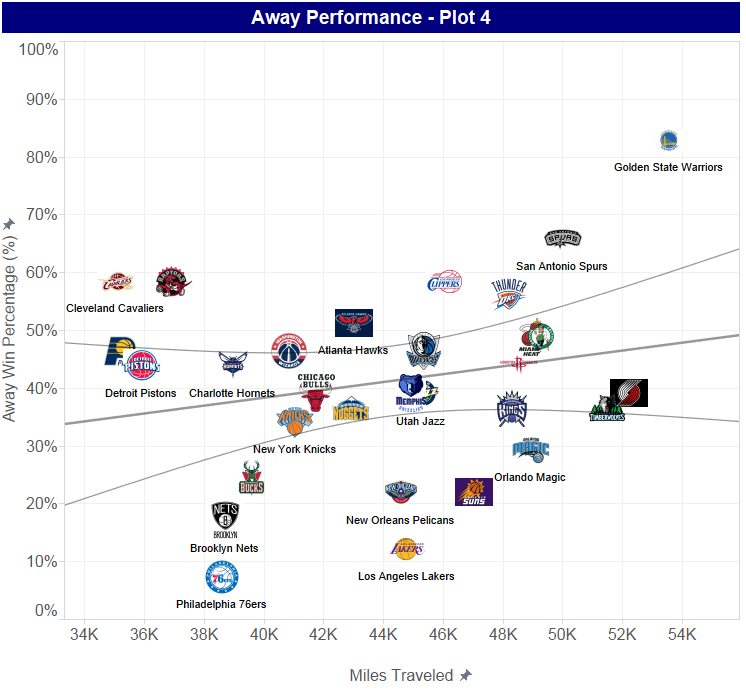 The last graph (plot 4) show a similar positive trend as in plot 3 which means that there would be a positive relationship between miles traveled and away win percentage. This essentially means that when teams travel more they also perform better, which seems peculiar. Interestingly these graphs illustrate the same phenomena as the NHL plots with teams sitting in similar positions in relation to each other.

Looking into this seemingly unusual result, one can see that if there is a positive or negative trend in home win percentage and travelled miles, we can expect to see similar behavior in the case of away performance. Therefore, there is reason to believe that the win percentage on the road is linked with how good a team is rather than the trip itself. Looking at the table below, we can see that the correlation for home and away win percentage in NHL is 0.38 and 0.89 for NBA. Through this we can confirm that NHL has a moderate (positive) relationship between home and away win percentages, while the correlation is close to perfect for NBA.

The observant reader might have seen that the trend line over home performance in NBA is higher than for NHL. Looking at the table above we can confirm this with the average home win % in NBA sitting at 58.7% compared to NHL at 52.9%. Inversely NHL has a higher away win percentage and the overall home team advantage might be slightly smaller compared to NBA.

To conclude we have looked at the number of miles travelled and what impact that has on a teams’ away performance. The data doesn’t support any link between the number of miles spent on the road and teams’ performances. However, it does demonstrate that the home and away performance of a single team is correlated. Furthermore, it looks like the better teams in NBA for 2015/16 year’s season tend to travel more. The opposite goes in NHL with teams travelling less tending to perform better regardless of playing at home or away. As a final comment, we can see that there is a disadvantage playing away games even though we can’t trace this effect back to number of miles travelled.