QIPCO British Champions Day is the finale to the British flat racing season, where a staggering £4.2 million prize money will be on offer. It is the conclusion to the British Champions series and features the finals of the five respective divisions; sprint, the mile, middle distance, long distance and fillies and mares. Here at TSZ, we shall be looking into the stats behind the five big races from the last 10 years, more specifically the records of trainers in each race, the record of favourites, the starting price of the winning horses and the ages of horses to win the races. Please note that whilst British Champions Day has only been around since 2011, the races featured have been taking place for a lot longer than this with just a couple of races changing their name. 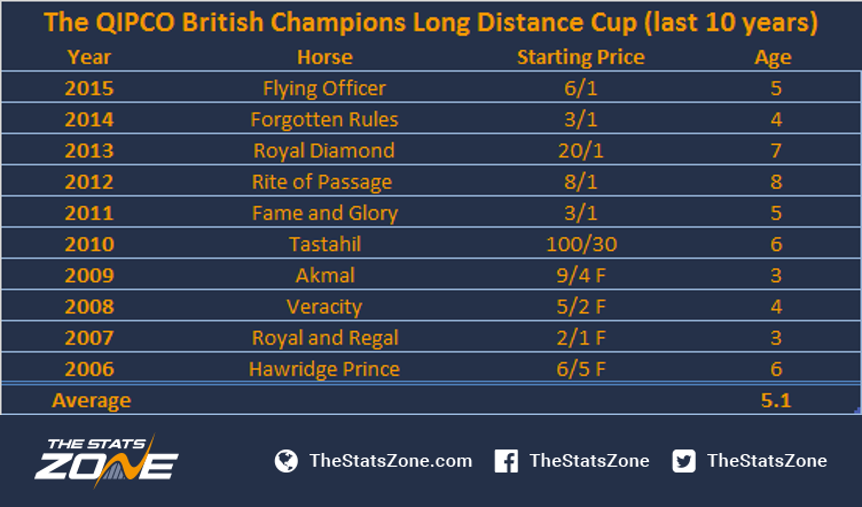 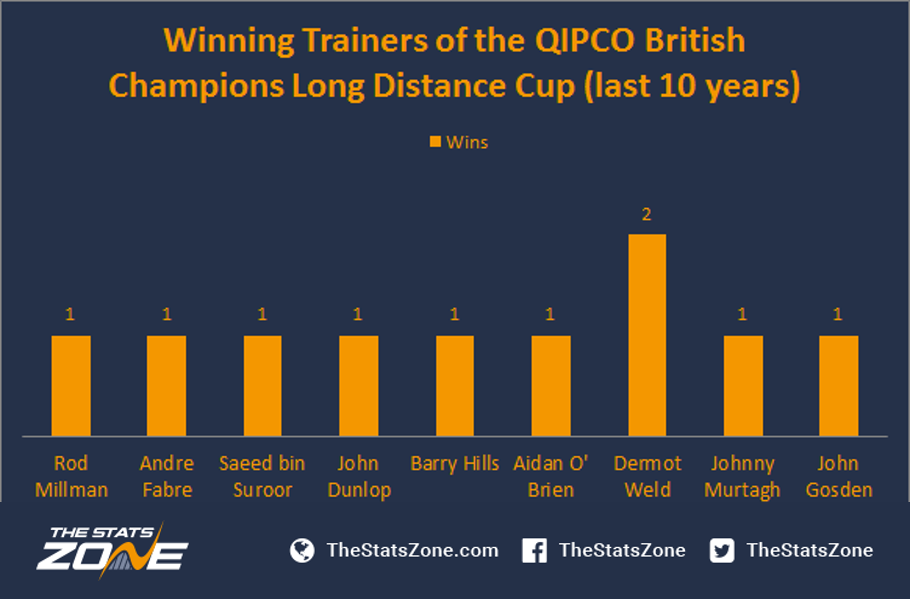 The standout horse in the 2016 running of this race is the Aidan O’Brien trained Order of St George; none of the other entrants in the race would’ve got anywhere near the third place in the Prix de l’Arc de Triomphe the horse achieved last time out. His competition comes in the form of last year’s St Leger winner Simple Verse, as well as 2014 winner Forgotten Rules who’s back to try and regain his crown for successful trainer in this race Dermot Weld; however, the horse is ground dependant and will hope for soft conditions come Saturday, otherwise it may not run. 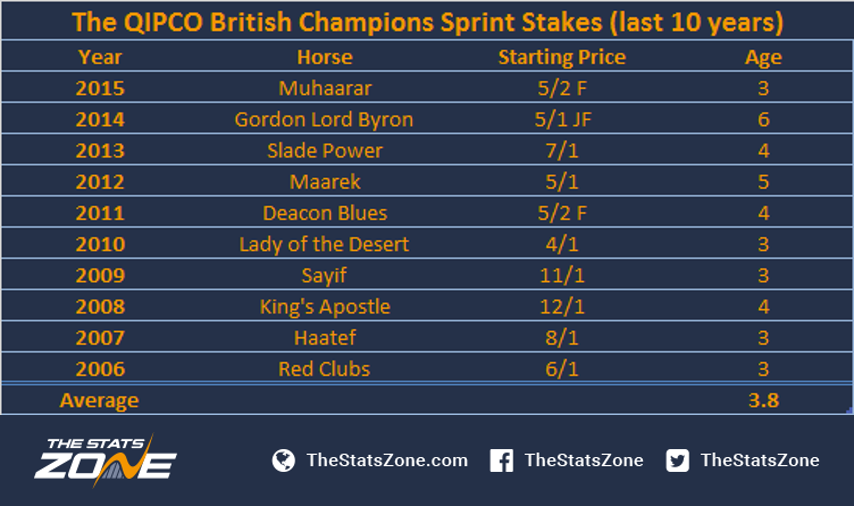 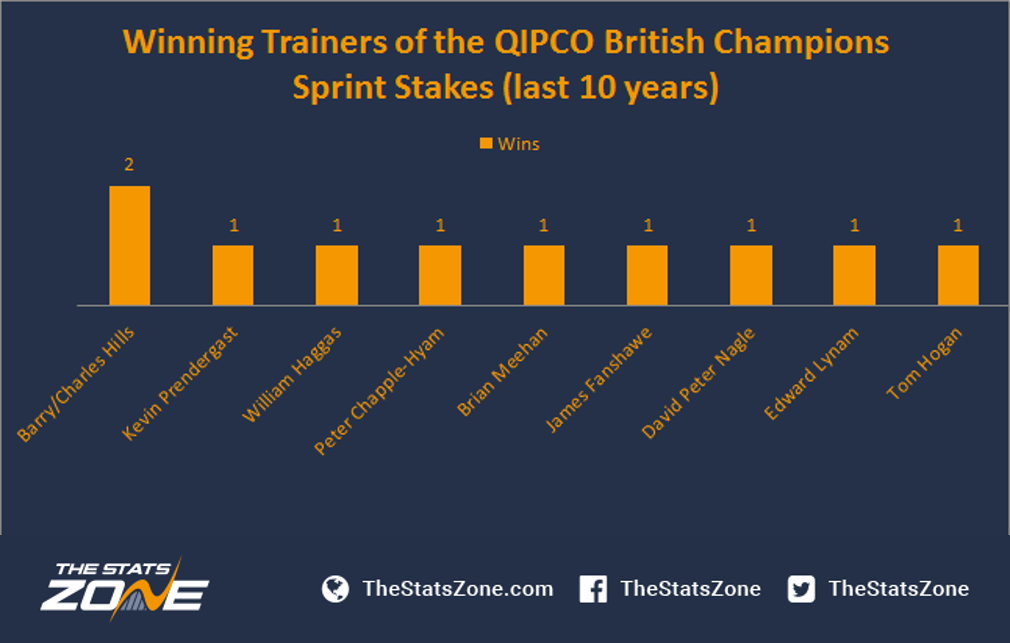 As you’d expect for a race worth so much money, there is incredible depth to the 2016 race. Henry Candy has two leading fancies for the race in Limato and Twilight Son, but the former needs the right ground conditions and will be pulled out if a lot of rain falls. Quiet Reflection, the Commonwealth Cup and 32 Red Sprint Cup winner and Mecca’s Angel are also standout names. If that wasn’t enough to whet your appetite, then add Shalaa who made a winning return to the track two weeks ago, The Tin Man who was runner up in the Sprint Cup and the progressive Librisa Breeze. We can see that punters have a tough task of picking the winner – hopefully the above stats will point you in the right direction. 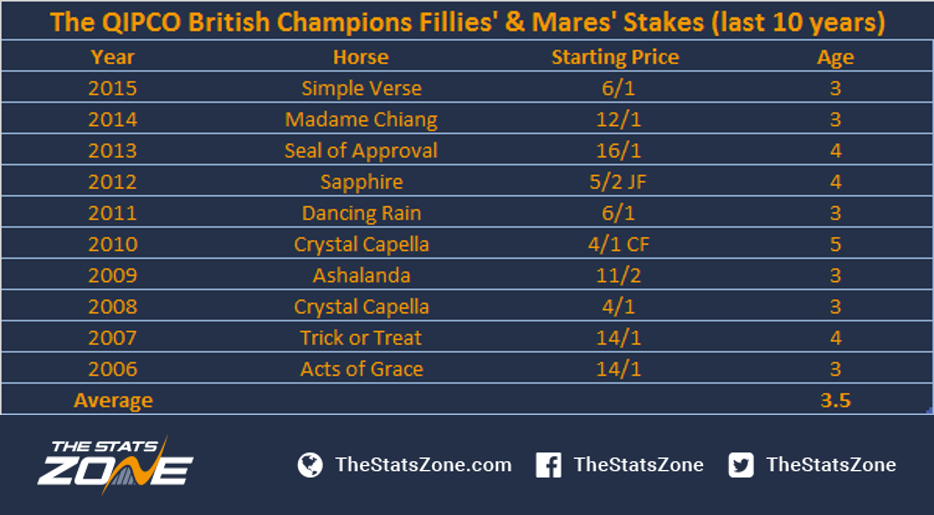 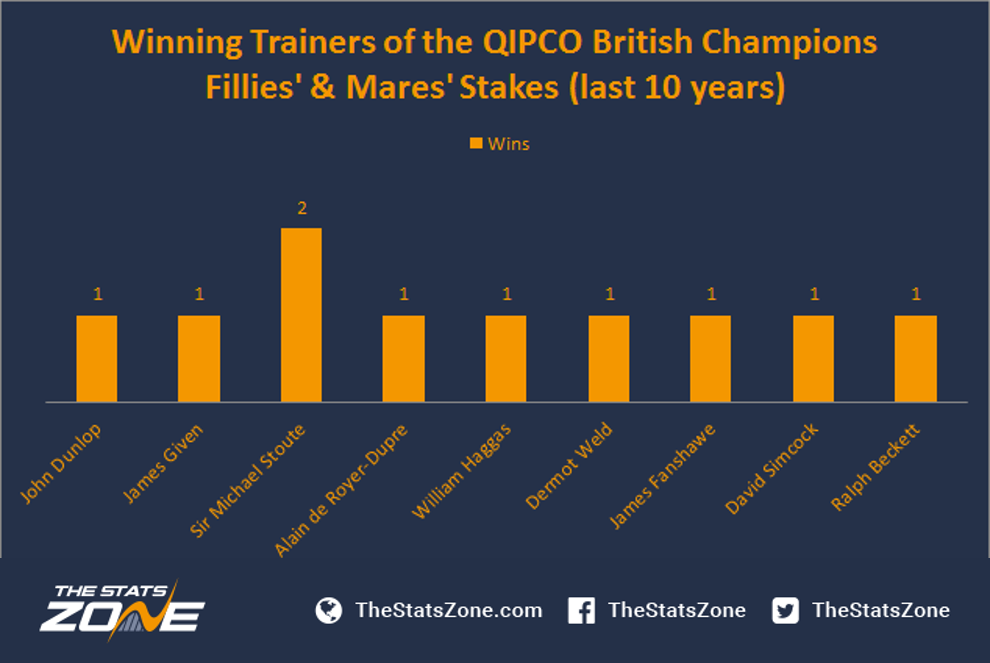 Aidan O’Brien’s fillies have been dominating this season with the likes of Minding, Found and Seventh Heaven producing excellent performances. The Dermot Weld trained Zhukova looks set to provide the greatest challenge to the Ballydoyle stable, who will run Seventh Heaven and Pretty Perfect. Aidan O’ Brien has failed to win this race in the last 10 years but looks to have a strong hand this time around. 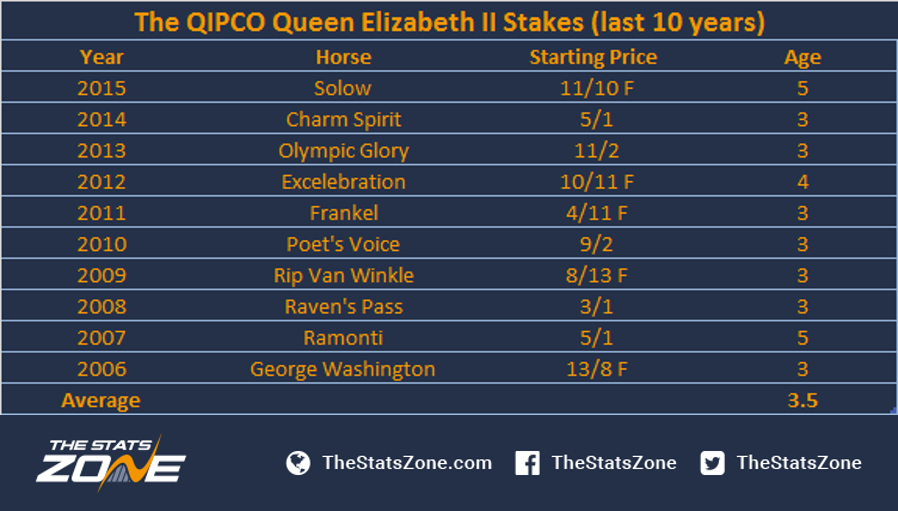 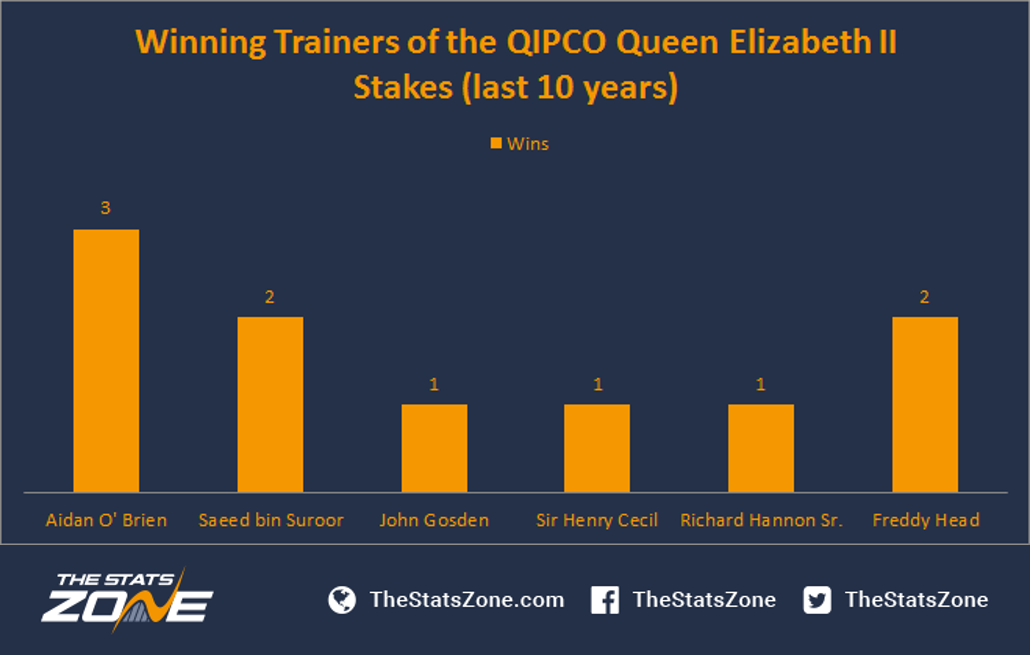 The 2016 edition of the QIPCO Queen Elizabeth II Stakes looks to be a tremendous prospect with Galileo Gold, Ribchester and Awtaad all set to do battle once again; throw into the mix the potential of Irish 1000 Guineas winner Jet Setting and Aiden O’ Brien’s Minding and this could be a brilliant race.

The QIPCO Champion Stakes
The QIPCO Champion Stakes is a Group 1 race for thoroughbreds aged three years and above. The race is run over a distance of one mile two furlongs and is in the middle distance category of the British Champions Series. The race is now run at Ascot with the last running at Newmarket in 2010; there is £1.3 million in prize money on offer, the richest prize of the day. 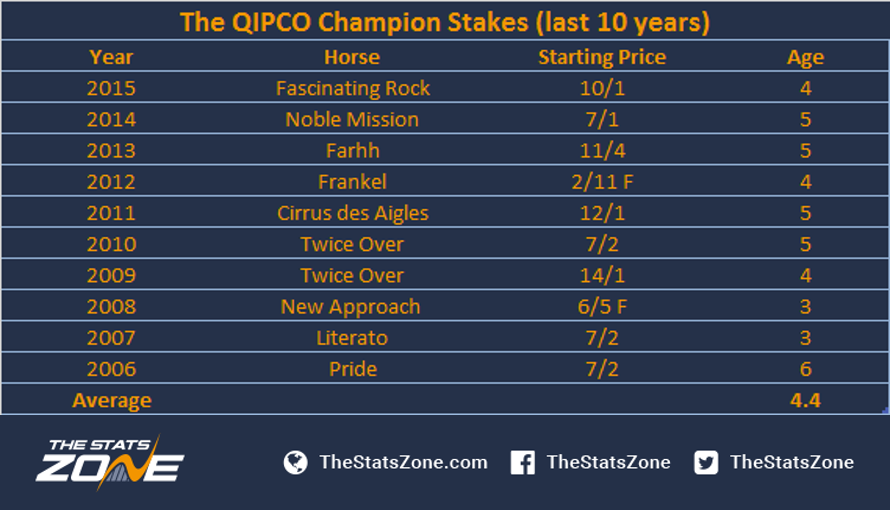 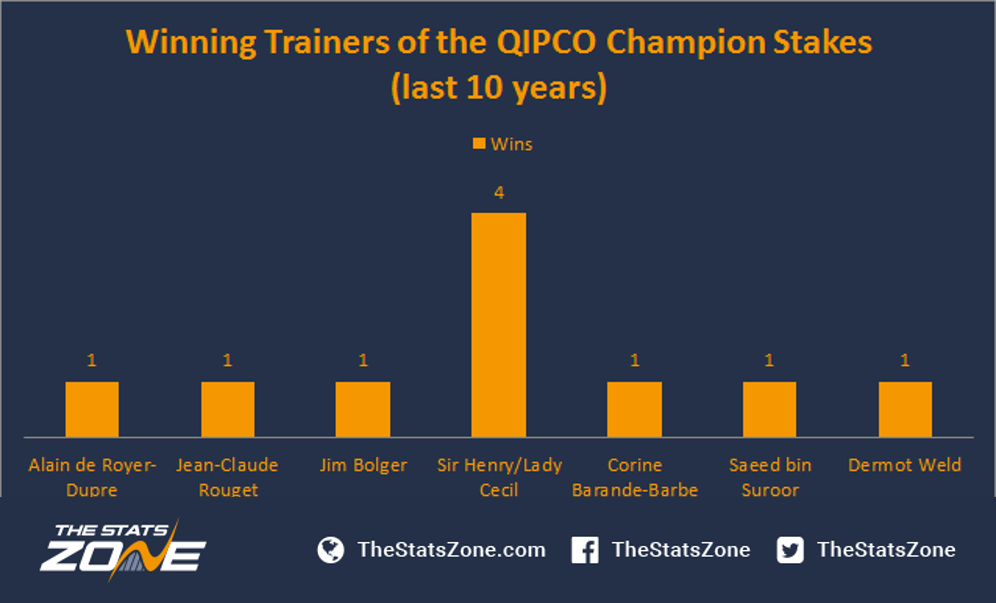 The 2016 edition of the QIPCO Champion Stakes has the potential to be a real crowd pleaser with Almanzor taking on a contingent of Aidan O’ Brien trained horses, be this Prix de l’Arc de Triomphe winner Found or runner up in the Derby, US Army Ranger or maybe even both.

This season, Aidan O’ Brien has set new heights in the horse racing world and now he sets his sights on the £4.2 million prize pot on offer on Saturday. The awe-inspiring trainer could end the flat season on a high; punters are likely to back him but take heed of our stats as you may find a gem in there.