4 Years in the Making

Very rarely are fights considered to be 50/50, but with Frampton a marginal odds on favourite, this is as close to a pick’em fight as ever. TSZ look at the key stats which may decide the fight. We’re taking a look at the pair to see how they match up statistically coming into this intriguing fight. 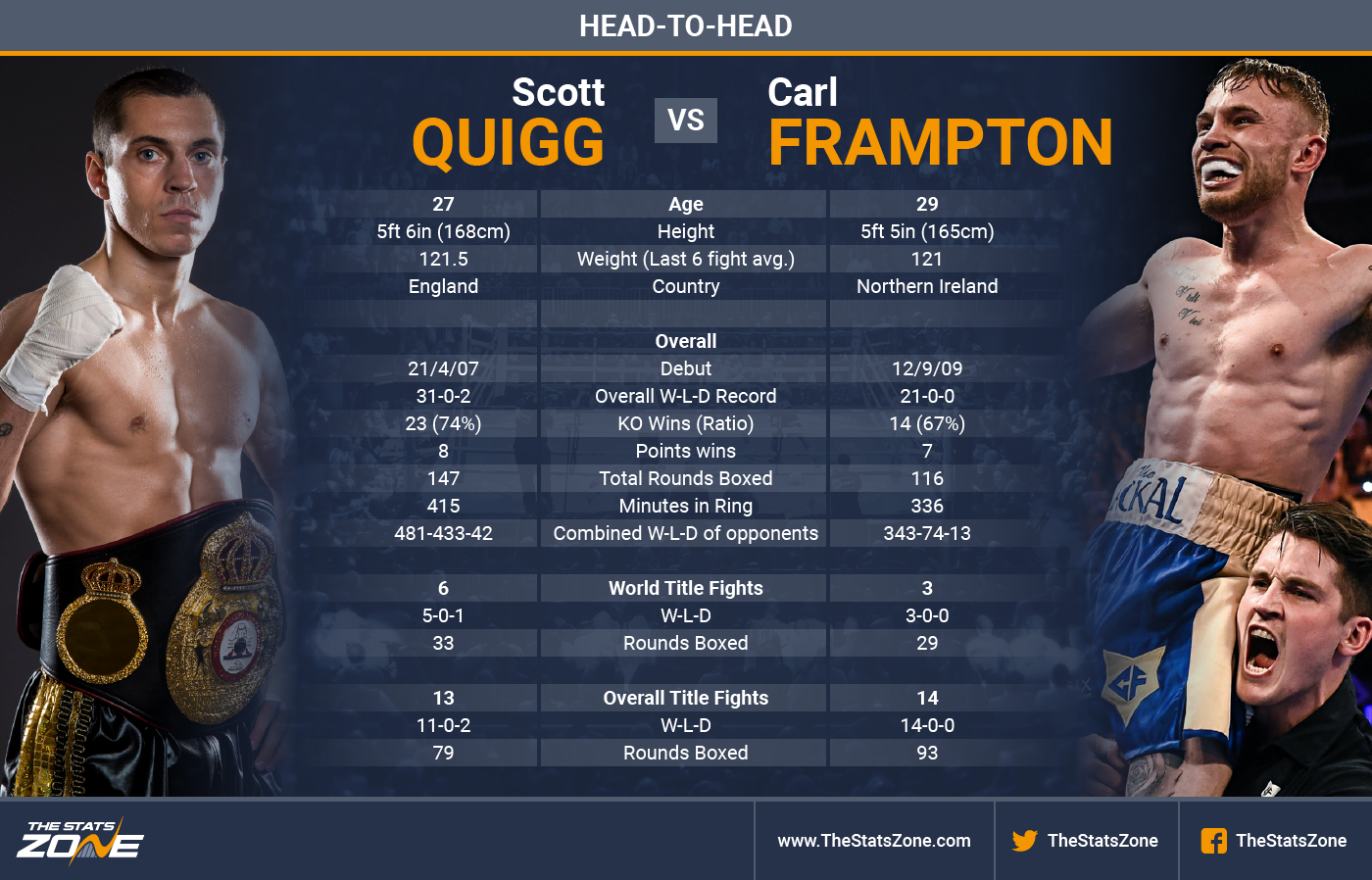 Quigg and Frampton have three mutual opponents on their records. Both beat Gavin Reid in 2010 (Quigg TKO6 and Frampton TKO2), and they had similar outcomes when fighting Yuriy Voronin 10 months apart in 2009-10 (Quigg TKO6 & Frampton TKO2). The most recent opponent was Kiko Martinez however. Quigg finished the veteran last July with a second round TKO, while Frampton has a 9th round TKO in 2013 against him, but laboured to a points decision win in September 2014. Incidentally, Martinez has tipped Frampton to win.

Looking at the combined records of the set of opponents each fighter has faced, there’s a significant difference between the two. Frampton has fought opponents with a combined 79.8% win ratio (343-74-13, compared with Quigg facing a combined win ratio of 50.3% (481-433-42). That is largely due to Quigg fighting some fighters with heavy losing records early in their careers, but it has been comparable over the last ten fights each.

Unquestionably with this fight taking place in Manchester, if there is a home advantage it goes to Quigg. He will certainly have the vast majority of the support on Saturday night. Only twice has he fought outside of the north of England with Stoke and London the only times he has ventured anywhere south of Cheshire. Frampton has fought all but one of his 21 fights in Northern Ireland or England. He travelled to El Paso in the States for his last fight when he scraped past Alejandro Gonzalez Jr on points after being knocked down twice, which was the first real time he faced real adversity.

Could home advantage work in Quigg’s favour on Saturday night? If it goes to points, with the crowd support cheering his every punch and Quigg’s likely highly workrate, it could well be a deciding factor.

Quigg edges the knockout ratio percentage 74%-67% but both have 7 knockouts in their last ten fights which is arguably the best sample when the quality of opponent has been higher.

Both fighters have only fought twelve rounds 3 times in their entire careers, with two of Frampton’s twelve-rounders coming in the last 3 fights. One of the potential deciding factors that has been noted in the build-up has been Quigg’s ability to bite on his gumshield and keep battling all the way, but one would expect both to be able to go the full 12 here. Even though Frampton had the two knockdowns last time out, he still managed to prevail on points through adversity.

This is a fight that could very well come down to the finer details. The weigh-in on Friday will be fascinating to see if either has gained a psychological advantage in the build-up to this fight, and how each is dealing with the weight of expectation. That as much as anything else could be the telling factor between the come fight time.

Who are you picking?